"Some racers have their methods, I have mine. If I’m the last one standing, I still win."
―Moordryd Paynn[src]

Sneaky, cunning, powerful and adept, the Dragon Eye Crew is descended from the ancient Black Draconium empire which started the original Dragon-Human War 3000 years ago. They are led by the ambitious Moordryd Paynn and his Psi-class dragon Decepshun. The crew debuted in the pilot episode, Episode 1: The Choosing, Part 1.

The Dragon Eyes have a large fortified base. They use Psi-class dragons and Black Draconium Gear to intimidate and scare opponents, draining them of both energy and will.

Other unaired members of the crew include[1]:

Official info on this crew.

Leader Moordryd and his dragon Decepshun. 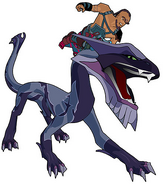 Cain on his dragon Coershun.

Moordryd, Cain, Rancydd and two other members attack Penn Stables in Episode 2: The Choosing, Part 2.
Add a photo to this gallery

Retrieved from "https://dragonbooster.fandom.com/wiki/Dragon_Eye_Crew?oldid=7633"
Community content is available under CC-BY-SA unless otherwise noted.